In 1980 the Vestry and representatives of Christ Church, Valdosta, petitioned the Diocese of Georgia and the Rt. Rev. Paul Reeves to purchase ten acres of land on Bemiss Road for the development of a second Episcopal church. Inspired by the foresightedness of Bishop Henry I. Louttit, then Rector of Christ Church, the first service of St. Barnabas was held on September 19, 1982 at the YMCA on Gornto Road with The Rev. J. Robert Carter as Vicar.  With the support of a nucleus of members from Christ Church, the St. Barnabas family continued meeting there until January 1983 when a move was made to the Seventh Day Adventist Church on Slater Street. Groundbreaking for the building on Bemiss Road, designed by architect Blake Ellis, was held on March 18, 1984. The first service was on November 18, 1984 and the dedication was celebrated by the Rt. Rev. Harry Shipps on December 16, 1984.

For those who like to know the reason for church names, St. Barnabas has an interesting background. Dr. Buddy Pitts and Bishop Paul Reeves were walking over the church site, talking about a church name. The church property was 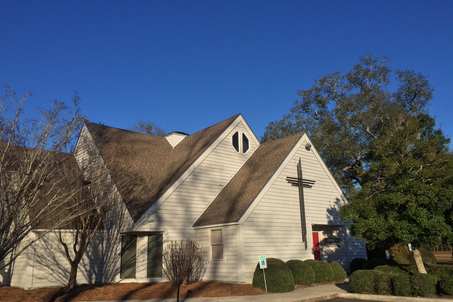 ​your Family and Friends

The History of St. Barnabas

originally a farm and as they approached the still standing barn, Bishop Reeves said, “Why not call it St. BARNabas!”

In 1986, The Rev. Tony Van Ham came to St. Barnabas as Vicar, bringing with him the valuable support of his wife, Julie. The music of the services was ably supported by charter member Hope Ince at the piano, but it was Fr. Van Ham’s strong belief that the sacredness of the services and the congregational music should be strengthened by organ accompaniment. As a result the Rodgers Essex 301 was installed and Janet Robinson began serving as organist on Easter 1988. It was also under Fr. Van Ham’s direction that the altar rail be added. While at St. Barnabas, Fr. Van Ham was also serving at St. James in Quitman and in 1988 he was called to full-time service there.

January 1989 marks the beginning of the service of The Rev. Jim Bullion. Under Fr. Bullion's care for nearly four years, the people of St. Barnabas
​experienced many interesting things. Soon after Fr. Bullion’s arrival, he negotiated with the Diocese to restructure the debt still due on the building. Fr. Bullion was instrumental in the creation of our very own “triple cross”. Under the inspiration of Fr. Bullion, a charter member, Dr. Margaret Ellis, was asked to develop an outward sign to show that our building was a church. Using her expertise as an artist, Margaret drew up plans for the “triple cross”. On March 1991 the design was accepted. Fortunately, member Ellis Bates was an expert in working with casting iron. He shaped and welded the 16 foot cross and with the help of Margaret’s keen artist’s eye, hung the “triple cross” on the wall just outside the front door. This “triple cross” has become the logo of St. Barnabas Episcopal Church.

It must be pointed out that the church building was originally planned as a multi-purpose facility. The kitchen with all the accoutrements was to the left of the sanctuary. If a dinner was to be held the configuration of church seating needed to be changed into a dining area. Fortunately, charter member Dr. Buddy Pitts and his wife Dotti were benefactors of a $20,000 fund designated to be used for a parish hall. A St. Barnabas committee and Fr. Bullion met with Bishop Shipps and the Commission on Mission to grant St. Barnabas $20,000 in matching funds. Thus began the work of building a new Parish Hall. On July 1991, a slab was laid and inspection was passed on November 1991. Derek Pickup, who had been the contractor of the church building, was general contractor for the Parish Hall. All the work was done by parishioners and was completed debt-free. Fr. Bullion and his wife, Mary, were both interested in the music of the church and during this time Dr. Lavan Robinson joined the staff as music director. Fr. Bullion was called to serve St. Patrick’s in Albany in 1993.

The Rev. William Pitner, who had been serving as an assistant at Christ Church, accepted the call to St. Barnabas in the fall of 1993. During his time at St. Barnabas, Bemiss Road was redone, which meant that the entrance to our property had to be redone. Because St. Barnabas was a mission church, the Diocesan Office was notified of the entrance changes. Negotiations and renegotiations between the Department of Transportation and the Diocesan Office resulted in the entrance we now have. Fr. Pitner was concerned that St. Barnabas was still paying on the original debt. At an annual parish meeting in January 1997, Deacon Pam Lightsey challenged the congregation to pay off the remaining $22,000 debt. By September of that year the challenge had been met. At a Loyalty Dinner in November 23, 1997 in which Jim and Mary Bullion were present, the mortgage was burned and St. Barnabas was and still is debt free.

St. Barnabas has continued to move forward, sometimes with interim priests like The Rev. Jim Cox and The Rev. Steve Clifton, and with the appointment of The Rev. Curtis Mears from January 2000 to February 2002. In the interims a commending word should be said for those who served as Senior Wardens – Janet Robinson, 2002; Charles Ray, 2003; Chris Jester, 2007.

January 1, 2004 The Rev. Mary Hemmer joined with us and expanded the outreach of St. Barnabas with the Ride for Relief, Blessing of the Animals, and use of our facilities for meetings of community groups. We had the joy of sharing in her marriage to Derek Demmler who was active in many of the outreach activities.

In the summer of 2007, The Rev. Reuben Rockwell was called as the Vicar. With his wife Erin we rejoiced in the birth of their first child, Amelia Jane. With the celebration of a Hymn Festival in September 2007, we began a year of events to recognize 25 years of St. Barnabas and all of those who have added their blessings to the ongoing spread of the Gospel with the help of God, the Father, Son and Holy Spirit.

November of 2008, The Rev. Denise M. Ronn was called as the Vicar of St. Barnabas. With her came her husband, David, who has added much to the worship and support of the mission of St. Barnabas. You can find David blowing his trumpet on Sunday mornings. At present, St. Barnabas is working towards establishing itself as a parish. For the last two years since the arrival of Rev. Ronn, St. Barnabas has been thriving. Excitement is in the air as God’s Spirit continues to draw people to God’s loving embrace found at St. Barnabas Episcopal Church.